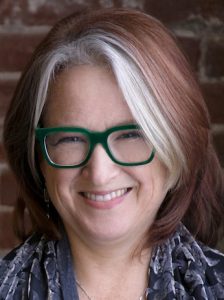 We are excited to welcome this month’s guest author, Jaye Robin Brown, whose novel GEORGIA PEACHES AND OTHER FORBIDDEN FRUIT was published by Harper Teen in August 2016. It tells the story of Jo Gordon, the out lesbian daughter of a moderate evangelical minister, and what happens when her father marries for the third time and they move from Atlanta to small-town Northern Georgia. In Brown’s words, the novel is “a love story and a look at the sometimes conundrum of having faith and being queer.”

What gave you the idea to write this novel?
GEORGIA PEACHES AND OTHER FORBIDDEN FRUIT came about because of a radio segment I heard about the insane wealth of some radio pastors. I thought, “What if one of those guys had a gay daughter? How would that go down?” And though I didn’t end up exploring the wealth aspect (my fictional pastor dad is successful but not obscenely so), I did explore the question of what happens if you’re a lesbian, but also a believer. Ideas often come that way to me. I’ll hear something on the news or in conversation, something as small as a sentence, and then an idea blooms. I try to pay attention and not miss those moments. 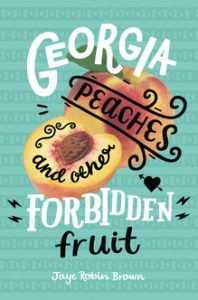 And what about your characters? Have any real-life people inspired them?
Absolutely. In GEORGIA PEACHES AND OTHER FORBIDDEN FRUIT, the love interest, Mary Carlson Bailey, has a twin brother nicknamed B.T.B. He is directly inspired by a former student of mine who was universally adored at the high school where I taught. Like my former student, B.T.B. has an intellectual disability that makes him much younger in years than his actual age of seventeen. I loved creating the true friendship between him and my main character, Joanna, as I saw a similar friendship play out in my art room between the student who inspired B.T.B. and another student.

In my first book, NO PLACE TO FALL, the love interest, Will McKinney, also was inspired by a former student. He (the student) was the much swooned-over crush of one of my art students, so I figured if he’s good enough for Savannah, he’s good enough to put in the book.

Do you have any tips for beginning writers?
Yes. First, read widely in your genre. You need to know what’s being published and how things are being written, and get a feel for story. Second, find critique partners. To this day, even with four published pieces under my belt, I cannot write without other eyes on the work. Third, don’t get trapped in a self-doubt spiral. Write it. Do the work. If you can’t make it good enough, then lower your standards. You cannot improve something that isn’t on the page. And fourth, have fun! Writing should be joyful — at least some of the time.

What was your biggest query mistake?
It wasn’t a YA query, but I dabbled with a few picture books and queried with one that I loved. The agent sent back an email that said he liked it and what else did I have. Silly me did not understand that meant more picture books and I sent him the middle grade novel I was working on. Needless to say, I didn’t hear back from him.

And you didn’t ask this, but my very first manuscript, which was a middle grade dog story, yep — I sent that out as a first draft to two different publishers. I was that fresh and naive to how the business worked, and also pretty over-confident. Ha!

If you could co-author a book with anyone, who would it be?
Funny you should ask! I’ve been in discussion with one of my former Pitchwars mentees about doing just that. But, if we’re looking at already published writers, I’m going to go with David Levithan for young adult or Jen Malone for middle grade, because both of them have done a number of awesome collaborative books and they could show me the ropes. It’s a definite writer bucket list item for me!

Ooh, great choices (and an opportunity for a shameless plug:  Jen Malone will be our July guest author)! So speaking of wildly talented writers, tell us about your most memorable fangirl moment. Who did you meet?
I was super excited when I found out I’d be doing a panel with Nina LaCour at the NOVA Teen Book Festival. Her books have been an instabuy for me since I read the first one. She is every bit as lovely and generous in person as I thought she would be. And she signed all my books 🙂

What book do you wish you wrote?
Um, duh. Harry Potter. It’d be nice to have that sort of career security as a writer. Plus, it’s genius.

Yeah … *pauses as we all daydream about a YA-romance-inspired theme park* … Okay, then! Time for our speed round:

Thanks so much! Fans can keep in touch and follow here:

Jaye Robin Brown, or Jro to her friends, has been many things in her life — jeweler, mediator, high school art teacher — but recently she’s taken the plunge into full-time writer life. She’s a Southerner at heart, by way of Alabama, then Atlanta, and for many years just outside of Asheville, but now she’s moved north for a bit of city living. Boston, baby! And though she’d like to think brownstones might find a way into her fiction, she figures kudzu will always be what comes to her imagination first.

Her debut young adult novel, NO PLACE TO FALL, came out in the fall of 2014 from Harper Teen. It’s about dreams, singing, friendship, love, betrayal, family, and mistakes. It’s also a love song to small town girls and mountain music. In April 2016, a companion novella, WILL’S STORY: A NO PLACE TO FALL NOVELLA, released from Epic Reads Impulse, a digital-only imprint, and follows Will McKinney’s side of the story. GEORGIA PEACHES AND OTHER FORBIDDEN FRUIT is her sophomore novel.