One of the challenges of writing contemporary young adult is the ability to keep things fresh, current. Use a word or an action that’s out of date, and you’ll be sent down a shame spiral, or worse, called…old. And yet, if you use tech or slang that is too current, too new — you risk the chance of it being considered antiquated by the time your book comes out. What’s a YA writer to do if you don’t want your story to be as outdated as MySpace?

Before you order that crystal ball from the Internet, here’s a handy guide to things that teens of today might not know existed (or are on their way to extinction.)* 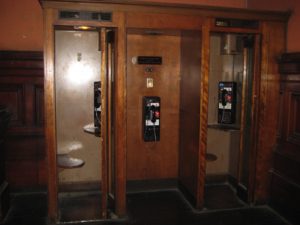 Phone Booths/Pay Phones. Remember these? Claustrophobic, right? Also, oddly mysterious and sometimes romantic. Granted, they were old when I was a teen, but the boys’ high school on the opposite side of town** was equipped with a wooden phone booth like the one pictured here. Once you closed the glass door behind you and the light came on, all you needed was a quarter and the number of your crush to escape for a few moments of flirty talk. (And okay, I’m partial since this did in fact happen to me during a basketball game — except he called me, no quarter necessary, so unlimited time!! 🙂 )

There’s actually more than just the advent of cell phones that lead to the demise of the phone booth/pay phone! Apparently, they were very conducive to criminal activity.

Also … I’ll try not to think of all the germs I was probably exposed to … blech, not to mention the broken heart when said crush fizzled out.

Passing Notes in Class. You think sending a clandestine text is hard? That’s nothing compared to the slight of hand required to pass a note. First, one must write said note … then fold it silently … then …the actual passing. What if your friend was across the room?

Was there a chain of people you could actually trust to pass it? Could you risk tossing it while the teacher had their back turned to write something on the chalkboard?***

Bonus points if your note contained some boxes that needed to be checked — then there would have to be a return. Oh the anxiety!

And if it ever got into the wrong hands … plot twist.

Mixtapes. Someone actually taking the time to record songs, in a specific order on a blank tape and dedicate it to you? Ah, be still my heart. This took effort. Mixtapes could be
friendly, or I’d like to be more than friendly, in a very non-threatening way. Is there a
better way to get to know someone than sharing music? What made it even more
intimate was the personal touches – hand writing the song titles in bubbly blue
inked letters on the little blank insert in the cassette and throwing in a song like
Personal Jesus to keep the recipient guessing your intentions.

Is there even a modern day equivalent? Somehow, a Spotify list doesn’t seem as
substantial. 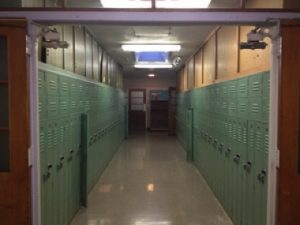 Lockers. I know … how can this be? Watch any teen movie or show and I guarantee there’s a scene by a locker. It’s the perfect place to have a reflective moment, to find an anonymous note, to have a romantic convo with the one-hand-against-the-locker-lean move, to find out you’re not invited to THE party…

…and yet, with the advent of classroom Chromebooks and online text books, these too are becoming obsolete. Some schools are even getting rid of them so there’s more space. But what do kids do with all their stuff? And what about all that cute paraphernalia to decorate it? Will the locker chandelier be obsolete soon too?

Has anyone ever used one of those?

Waiting for an arcade game — Remember walking up to Ms. Pacman and placing your quarter down to show that you were next? Um, yeah, me neither. Who needs to do that when you have an arcade in the palm of your hand?

Photo booths in the wild — No, not the ones with props that you can rent for a Sweet Sixteen. The old, old kind that made all sorts of noise as your pictures developed and how you would have to handle the photo strip very carefully since it could still be wet. There was no retake, unless you wanted to fork over the cash. No Facetune app if you had a zit or a crooked smile. This was a one and done. (And fun since if you were taking it with another person you had to get super, super close to fit into the frame of the picture!)

While this list makes me slightly nostalgic, I think there are great new ways to incorporate modern tech into your plot and setting. Out with the old and in with the texting, Skyping, and selfies!

*unless of course you are writing historical fiction, then ignore…

**I went to an all girl high school, our brother school was on the opposite side of town … talk about antiquated.

***which is also disappearing in favor of dry erase and smart boards!

Have I forgotten anything? What would you add to this list?

4 thoughts on “Everything Old is … Just Old”