A few months ago I attended a local Paint Nite with my sister. If you’re not familiar with Paint Nite, the skinny is this: A group of people get together at a local restaurant/bar & grill to drink adult beverages and follow along with an instructor to paint a masterpiece of their own. Sounds kind of fun, right? To be honest, my inner teen rebelled at the idea. Organized frivolity? Um, totally cringey. Older, wiser me wanted to simply create without judgment and chill. Something I rarely, if ever, allow myself to do.

On the Paint Nite website, you can type in your zip code and find events near you that feature paintings of varying degrees of difficulty. My sister and I agreed on a picture called “Let Your Light Shine” and paid our entry fee. We arrived about half an hour early, ordered up some sauvignon blanc from the bar and picked out our work space. Two seats, close to the front, so we could have a good view of the painting we were going to recreate. 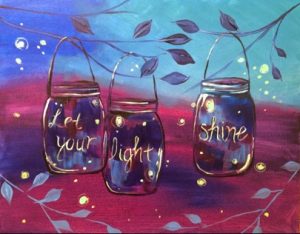 Once we figured out how to tie our green artist aprons, we were given small palettes with splotches of red, blue, and black. (White and yellow came later.) The instructor turned up the classic rock, picked up her thickest paintbrush and launched right into masterpiece creation 101. Staring at my own blank canvas was daunting. I hesitated before committing to mixing a background color. I’m a perfectionist, so I really wanted to match the color of the original, even though the instructor was all about putting your own stamp on it.

We all know what perfection does to creation, right? In the words of the inimitable Ginger Spice … (via Brainyquote.com):

Yep. Paint Nite was bringing out that creative demon that relishes reminding me my work is, well, imperfect trash. This was supposed to be fun, and there I was fretting over “getting it right.” I took a sip of wine and forged ahead. We only had so much time for each section of the picture before we had to wave our canvases over our head in time with the music to help the paint dry faster. (cue inner teen eye roll) My background wasn’t exact, but it would have to do … then onto the branches.

Again, I fretted about the color, the thickness of the branches, the shape of the leaves. Who did I think was going to see this? It’s not as if I was gunning for The Frick Collection, but to that part of me that has trouble letting go and enjoying the process, it felt like I was. At one point, while the ladies next to me enthusiastically belted out “Living on a Prayer” and painted with a careless fervor I secretly envied, my fist clenched with artistic angst.

Why am I so uptight?

It’s a question I ask myself all the time during first draft. I envy those writers who say first draft is their favorite part of the process. Mine is revision — that’s when I play. For me there’s something very freeing about having words on the page. First drafts make me nervous — a blank canvas. Instead of getting excited about all the possibilities, I focus on the million different ways I could screw it up. Older, wiser, l’artiste moi, KNOWS it’s about the journey. That part of the fun of creation is the discovery. When had I lost that playfulness?

This is what no one tells you.

Under deadline, it’s difficult to be playful and appreciate the journey.

It’s not impossible, of course. I’ve done it — hit that gorgeous time-bending sweet spot when the writing comes effortlessly and you look up and four hours have passed. Some days, though, it feels like a race against the clock to hit a word count. I know that sounds clinical and devoid of joy but sometimes it’s also necessary. While the creative demon of perfectionism can be oppressive at times, it fuels me to produce, makes me strive to work harder, take risks, and meet deadlines. There’s a fine line between being driven by your demons and being defeated by them. I’ve learned to embrace the struggle, but it’s an ongoing process. I didn’t think it would rear its gnarly head at Paint Nite though.

I’ll admit to gritting my teeth as I tried to get the exact curvature of the hanging mason jars. The final touch was the words on the jars and the fireflies surrounding the trees. The instructor encouraged us to use a different phrase or names of family members. I had to take a few deep breaths, allow myself to relax — going off book? Gah!! I liked the simple “Let Your Light Shine,” so I stuck with that. After I was finished, I peeked at the canvas of one of the women who’d been singing and laughing while she painted. It looked nothing like the original picture. The colors were off. The mason jars were ROUND! She’d put her kids initials on each jar! And yet, it was still beautiful and most definitely her own.

Here is my finished product … be nice. 😉 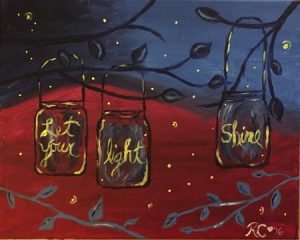 On our way out of the bar, we passed a table of people who were just finishing up their dinner. They were curious about all the laughter they’d heard in the back room and wanted to see what we’d been up to. Some of us passing by held up our canvases. We were greeted with polite smiles and nods. No “Nice” or “Great work.” Just … amused looks. Maybe it was the wine, or maybe it was that feeling of having created something just for enjoyment, but their lack of a positive response didn’t bother me.

In spite of having to tamp down that perfectionist voice several times during the night, I actually had … dare I say it … fun. I like to create without worrying about its worth, to lose myself in play. I had started with a blank canvas and turned it into something that kind of resembled three mason jars hanging from a tree.

A friend of mine once talked about admiring a certain piece of pottery because she could really see the “hand” of the artist in it. I’d never thought of seeing art that way. It turns what might seem clumsy to the eye into something more profound.

Imperfection lets you see the hand in the handiwork.

Are you a perfectionist with your creative endeavors? How do you deal with it?