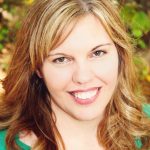 There’s been a lot of fangirling around here this month as we welcome Jen Malone, author of  five fun “girl power” tween/middle-grade books and three YA romance novels, including her new (as in, July 25, as in, next week, as in, you should probably pre-order NOW so you can devour it the second it comes out!) release Changes in Latitudes,  which is set aboard a sailboat off the Pacific Coast.

What gave you the idea for Changes in Latitudes?

Since my two previous YA novels — Map to the Stars and Wanderlost — are both travel romances, I was casting around for a concept that would allow for another road trip plot, but also be something a bit new and different. Except what was really pulling at me was a desire to explore a loving-but-complicated mother/daughter relationship. The two concepts finally merged for me when I asked myself how I could “trap” a teen girl into spending a lot of time with her mom, since most 17-year-olds are much more absorbed with their friendships and life outside of their home. 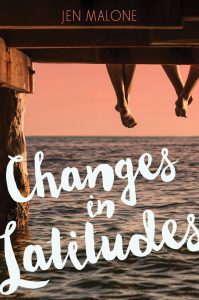 And then a sailing trip popped into my head. A sailboat, while promising something exotic and adventurous, can also be claustrophobic as hell, and the idea of my main character, Cassie, wanting to avoid at all costs this situation she’s gotten into with her mom but literally not being able to get more than 40 feet away from her without landing in a vast ocean was about as trapped as I could imagine, short of sending them both to jail.

But, rest assured, I love humor and lightness in my stories above all, so in the midst of the two of them fixing their relationship, there are tons of interesting shore excursions in ports along the coast, a zany cast of characters populating the two other sailboats caravanning alongside them from Oregon to Mexico, and, of course, a cocky and adorable deckhand named Jonah who rocks Cassie’s world more than any waves could.

Your release is just a few days away. How do you plan to celebrate?

I’m so excited, because this book releases the day before RWA begins, so I’ll be in Orlando with three of my author besties — Pintip Dunn, Brenda Drake, and your very own Darcy Woods. We’re doing a panel at the Orlando Public Library on Monday night, which I’m considering the de facto book launch for Latitudes, and then on the actual day of release we plan to hit up the Wizarding World of Harry Potter. Spending the day immersed in an author’s fantasy world brought to life feels like the perfect way to celebrate a release.

And then, equally thrilling, the following week I’m accompanying my dad and uncle on a three-day windjammer sailing trip off the coast of Maine. After spending so much time writing about sailing while actually curled up in my tiny writing space, it’ll be amazing to celebrate on the open seas. (Though I’m fervently hoping we don’t have any whale encounters of the variety Cassie and her mom experience. I’m keeping mum on my hopes regarding cute deckhand eye-candy like Jonah because The Husband might read this. Ahem.)

Speaking of cute deckhands and eye candy: Kissing scenes. Do you find them easy or more challenging to write?

They are my favvvvvvvvvvvorite thing to write! And I think fairly easy, because I use them as reward for making it through more taxing scenes, so I’m usually approaching them in a “Wheeee, I get to let loose!” frame of mind. The hardest part for me is keeping track of whose hands are where. 🙂

In Changes in Latitude, I had a ton of fun writing one set in an alley in San Luis Obispo called Bubblegum Alley because it is crammed (top to bottom, for the entire length) with decades worth of people’s used chewing gum. Getting backed into that wall in the midst of a hot kiss is a little, er, sticky (sorry, truly bad pun.)

If you could co-author a book with anyone, who would it be?

I consider myself incredibly lucky that I actually have co-authored four middle grade books, and with some of my favorite authors to boot. But the most unique experience by far was with a middle grade novel I have coming out in August called BEST. NIGHT. EVER., which is co-authored by SEVEN of us.

It’s one novel (as opposed to an anthology of stories) and is told in Love, Actually fashion, with all these intersecting story lines taking place over the course of a single (crazy) night. Since the concept was mine, I got to act as editor, and it was the closest thing I’ll likely ever experience to what I imagine a Hollywood writer’s room to be — we were so busy cracking each other up in Google Hangouts I’m amazed words made it onto paper!

What is a typical comment you get from a critique partner?

“But what is she feeling?!” is one a treasured CP of mine must have saved on her cut-and-paste clipboard by now. I tend to gravitate toward rom-com-y pratfalls and humorous/outlandish scenarios for my characters (or put another way, more external plotting versus emotional internal arcs) and, while fun to write and (hopefully) fun to read, I have to be reigned in a little and reminded to boost the emotions that give the story a heart.

Taking baby steps away from pure light-and-fluffy with Changes in Latitude brought me way out of my comfort zone but is something I’m really proud of attempting. So much about publishing is a combination of luck and forces outside your control, so learning to make my goals things I am personally accountable for — challenging myself as a writer being the big one — has really allowed me to appreciate the great things about my publishing experience without too much of the green-eyed monster taking hold!

If you weren’t an author, what would you like to do?

If Joanne from Fixer Upper ever needs a break from Magnolia Designs, I volunteer as tribute! (She can take Chip with her though; I’ve already got a husband who is aces with the corny dad jokes.)

What was your biggest query mistake?

Oh, you’ll all love this since it is next-level embarrassing. My third-ever query was to a male agent who happened to share the same first and last name of an ex-boyfriend of mine. I thought this was the universe speaking and further thought it would make my query stand out in his inbox if I started my query to him with, “I used to be in love with {NAME REDACTED OUT OF KINDNESS TO HIM AND FOR MY OWN SELF-PRESERVATION}. He broke up with me, but now might be the perfect time for another {NAME REDACTED BECAUSE I’M CRINGING TOO HARD TO TYPE IT} to get the chance to fall in love with me… or at least with my words.”

And now he’s my agent and we have 17 book babies together. JUST KIDDING! He responded in about 10 minutes, with good humor and a firm rejection. You know how agents proclaim to keep files of the crazies in case they go missing one day? For sure I’m on his. (For the record, I truly am exceedingly professional. I don’t know what came over me!)

Wowza. THAT is a killer bad-query story. Pretty sure we’ll get a rash of lawsuits from our subscribers this week for ruined keyboards. And on that note, let’s move on to the speed round, shall we?

Thank you so much for joining us during your pre-release week, Jen! Here’s where readers can connect and find out more:

Jen Malone writes fun and flirty YA travel romances with HarperCollins and humorous “girl power” MG adventures with Simon & Schuster and Random House. She is a former Hollywood publicist who once spent a year traveling the world solo, met her husband on the highway (literally), and went into labor with her identical twins while on a rock star’s tour bus. These days she saves the drama for her books.

2 thoughts on “Jen Malone and Romance on the High Seas”